Go deeper
Lightenings viii
The annals say: when the monks of Clonmacnoise
Were all at prayers inside the oratory
A ship appeared above them in the air.
The anchor dragged along behind so deep
It hooked itself into the altar rails
And then, as the big hull rocked to a standstill,
A crewman shinned and grappled down the rope
And struggled to release it. But in vain.
'This man can't bear our life here and will drown,'
The abbot said, 'unless we help him.' So
They did, the freed ship sailed, and the man climbed back
Out of the marvellous as he had known it. 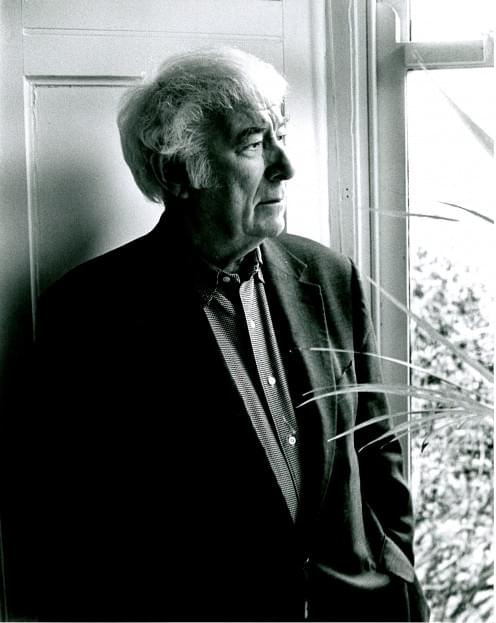 Astonishment at horizons and attention to specifics – the alternation of these two moments is the essence of the vision of Seamus Heaney (1939-​2013), one of the most important modern English-​speaking poets. In his first collection, Death of a Naturalist (1966), he focuses on his childhood on a farm in Derry County in North Ireland. In collections from the 1970s and 80s he among other things dealt with the sectarian violence that was occurring between North Ireland’s Catholics and Protestants.
The focus of Heaney’s poetry gradually grew broader, until it covered almost the entire Western poetic tradition from Virgil to current times. Yet his poetry preserved its distinctively intimate character, with images from European culture or Irish history alternating with personal reminiscences. Aside from twelve collections of poetry, Heaney’s translations and essays are also an important part of his oeuvre. In 1995 Seamus Heaney received the Nobel Prize for Literature.
During the next air voyage of the spring the following guests will talk about Seamus Heaney´s work:
Catherine Heaney – daughter of poet Seamus Heaney
Bill Shipsey – founder of Art for Amnesty
Justin Quinn – poet and critic
Daniel Soukup – translator
Moderator: Mariana Machová
Admission  60/​40Kč
Free for members of the DOX Friends Club
Reservations are required at rezervace@dox.cz
The programme will be simultaneously translated from English to Czech.