Go deeper
This exhibition is taking place at the Art Archive as part of the Polička/​Shelf project
When strangers first meet, they shake hands. The touch of palms is the first contact between people, a gesture of mutual trust and respect. A handshake can be cold or friendly, but cannot be refused without violating the boundaries of decency and social convention.
In contrast, a kiss on the face isn’t so matter-​of-​course here. We can decide whom we will allow to get this close and with whom we can take the liberty to do so ourselves. For those who know each other little or not at all, a kiss can be rather tentative, while among friends it can not infrequently lead to unease if left out. 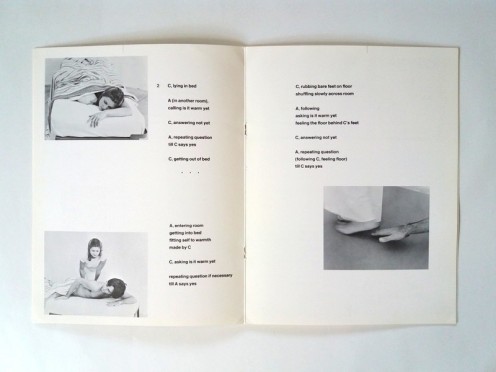 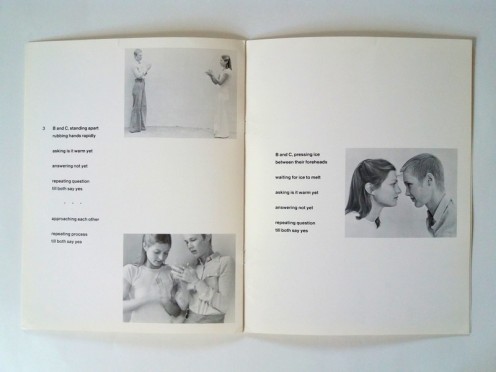 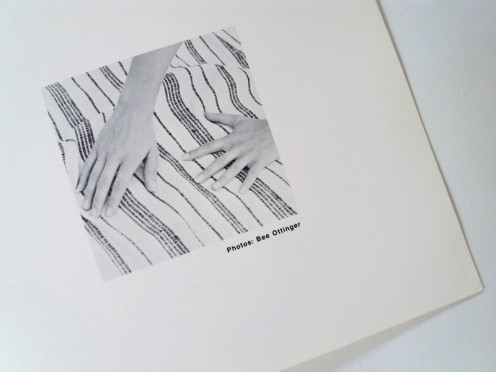 WARM-​UPS by Allan Kaprow (1927 – 2006) records one of a number of his activities: it took place in 1975in Boston, and involved staging the first contact between strangers. In the introduction that is part of each series of books we read: We call preparations for a certain activity “warm-​ups” – in sports or theatre, “warm-​up exercises” take place before the activity itself. And in daily life, one uses a similar process to “warm up” prior to encountering an unfamiliar person or situation. /​ Allan Kaprow, 1975
The photographs themselves then capture the performance. Strangers for example shake hands while holding an ice cube until it melts and both feel warmth, or they leave a warm bed for each other in a cold room.
In all staged activities, people touch tentatively. The intimacy of their personal space is not violated by force. Frequently all they transfer is warmth. But human warmth elicits strong emotions, and like smell is associated with memories of the body that left it behind. The tension of the static images is  thus in contrast with the almost banal activity they portray. Though they don’t depict anything intimate, the non-​actors’ uncertainty is palpable in them, their unease can be felt. And Allan Kaprow intentionally plays with this unease. In it, we rediscover the beauty of the everyday.
The situations that Kaprow stages aren’t just superficial attacks on ingrained interpersonal inhibitions; in the situations that he stages, people aren’t humiliated. WARM-​UPS took place in the homes of volunteers, who were instructed beforehand during a preparatory meeting, and the staged activity was then followed by a joint discussion of the experience.
Allan Kaprow’s work included painting, installations, and happenings. His activities were also recorded on videos and photos. But most frequently, he recorded things in thin black notebooks – and for many activities, exclusively. The notebooks take the form of civilian reportages and are less descriptive than the videos he made. A book also makes it possible to return. They make it possible to again page through the fleeting moments that Allan Kaprow records at any time one wishes. They are permanent.
Anna Pleštilová