Go deeper
The inner part of the exhibiton called Inside ended on the 3rd of June, the outer part - Outside - can be found on sculpture terrace and the courtyard of DOX until the 8th of October.
Outside (13. 4. - 8. 10. 2012)
Inside (13. 4. - 3. 6. 2012)
DOX Centre for Contemporary Art presents an exhibition of sculptural objects by Čestmír Suška Outside /​ Inside . The focus of the exhibition consists
of works from the years 2008–2012, exhibited here for the first time. The exhibition concludes a successful project Rusty Flowers , which has been exhibited in art institutions and public spaces in the Czech Republic and also abroad. The part entitled Outside   is installed on the sculpture terrace and in the courtyard of DOX. The part entitled Inside is situated in the tower. 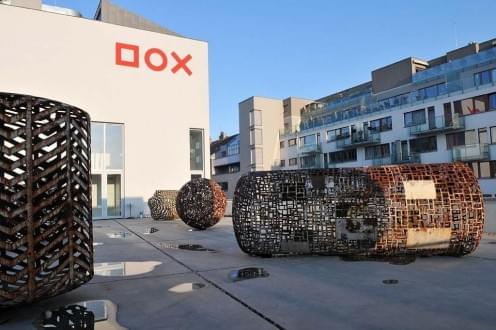 “Čestmír Suška has been through a whole range of stages in his own creative work, which upon first glance immediately connected to a certain sculptural material. The collection of perforated and welded industrial tanks and mutations thereof, culminating in the OUTSIDE /​ INSIDE exhibition presented at DOX Centre for Contemporary Art, is seemingly created in abstraction from his previous approaches. The principle of stripping and the distinctive interior space however appears earlier in the objects made of fired clay.  The idea was born during his residence in Vermont in 2005, where he encountered an American variant of tanks for heating fluids in a local metal scrap yard. The amateur soon matured into a professional and within three months had created virtuoso elaborate laced structures and had also collected cut off elements as a secondary product, offering possibilities for further use. First of all he composed them in flat installations and subsequently printed them on paper. Suška exhibited these monotypes, utilising the process of rusting together with objects and cartons, as the triune result of his discovery. It was not long before he began to weld these iron elements back into an entirely new spatial composition.“ 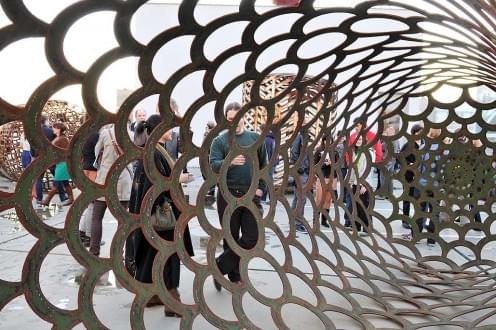