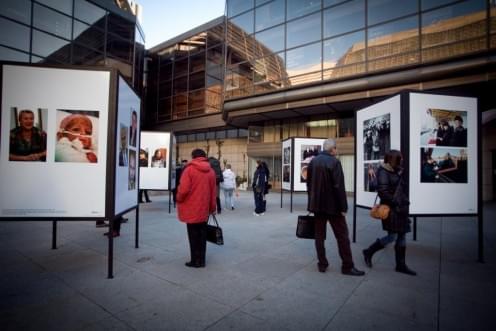 The exhibition consists of 36 panels that present pairs of documentary images, most often pictures found in the Czech Press Agency Image Bank (Fotobanka ČTK) or in newspapers and magazines. By juxtaposing one image with another, each panel gives them a new meaning that highlights similarities or differencies of represented phenomena of the past and the present, of historical events and everyday situations. These "close encounters of different kind" thus make the viewer reflect on how the present relates to the past, and on what role we play in this relationship. Confrontations draw on the so-​called confrontages, i.e., collages based on the same method made by Zdeněk Urbánek and Jiří Kolář in the early 1950s. The project is also inspired by E. M. Forster's maxim "only connect". The author and curator of the exhibition is Jaroslav Anděl.
The exhibition is open to the public free of charge from November 18 to December 15, 2011. It seeks to animate public space by elaborating on some of the themes of the exhibition project Lucifer Effect: Encountering Evil (DOX Centre of Contemporary Art, till January 2, 2012).