Go deeper
This exhibition of personal diaries is taking place at the Art Archive as part of the Polička/​Shelf project.
The Art Archive will be closed between March 14 and April 5. Thank you for your understanding. 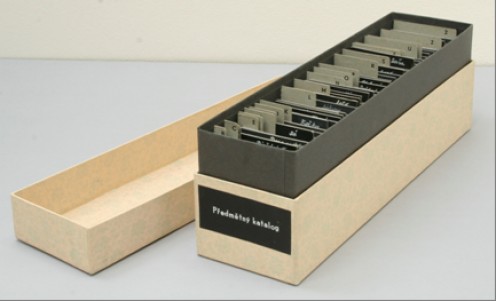 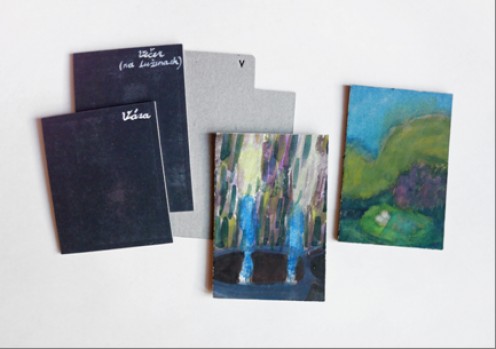 Darja Čančíková is an illustrator and painter originally from Moscow (*1982), living in Prague since 2000. Darja Čančíková Catalogue of Items is neither a book nor an ordinary card catalogue. From the perspective of art studies we could classify it among book-​objects, as it is truly an object that is merely reminiscent of a book, allowing one to page through it and read, but not resembling a book in any formal way.

Individual cardboard cards bear gouache renditions of images from her home and childhood. She then named the individual cards and arranged them in a box in alphabetical order. A reminiscence of a trip on the metro thus found itself next to for example mussels, a forbidden mask, and someone named Maria who is sleeping. I could go on, but why? The things, situations, and people portrayed are connected only in Darja Čančíková’s memory. A random viewer can’t experience the taste of Cookies for the Road, has no idea what he or she sees in a picture entitled Across the Way, and if he or she does imagine Natalie’s Garden, it will doubtlessly have different colours.

The images in the card catalogue are personal and for us foreign, illegible. All we perceive is an atmosphere of nostalgic sadness. It is an odd type of sorrow and nostalgia for which Russians use a special expression: khandra. Darja admits to her attachment to roots and the past – and also follows up on the Catalogue in her later diploma thesis, a series of thirteen graphic sheets symbolically named STESZKY [Translator’s note: a play on the Czech words stesky - nostalgic sadness, and stezky - paths].