Go deeper
democracy [dih-mok-ruh-see] (noun)
1. government in which the people hold supreme
power, usu. through their elected representatives
2. state having such government
3. social equality
action [ak-shuhn] (noun)
1. the process or state of acting or of being active
2. something done or performed; act; deed.
3. an act that one consciously wills and that may be
characterized by physical or mental activity
The exhibition Democracy in Action responds to the current social discontent by presenting various protest movements as well as by exploring ways of how citizens can initiate positive social change. By visualizing social data, for instance, by using statistics, diagrams, and timelines, the project invites the public to question the mainstream narrative and describe specific issues and problems.
If we look back through the years since 1990, we find out that the Czech Republic has now fallen from seventy second to ninetieth position (according to the data from 2009) in terms of expenditures on education, whilst the quality of the environment, for example with regard clean air, is again deteriorating after years of improvement, in fact in certain regions the situation is worse than during the years of the socialist regime, and a similar situation applies to mortality.of the 31 OECD countries the Czech Republic ranks sixth from bottom. And finally, as concerns the moral environment, our country is in a yet worse situation than in 1990.in the index of corruption it has fallen even below the standard of a number of developing countries. Instead of enthusiasm and hope for a better future, cynicism and apathy now predominate. Trust in constitutional agencies has fallen to the lowest level in history, citizens again feel that decisions are being taken without their involvement. Dissatisfaction is manifested in the growth of extremist politics. According to recent studies, the majority of citizens value a strong leader over democracy. On the other hand, the rising number of protests and initiatives indicate that Czech civic society is waking up from its slumber. 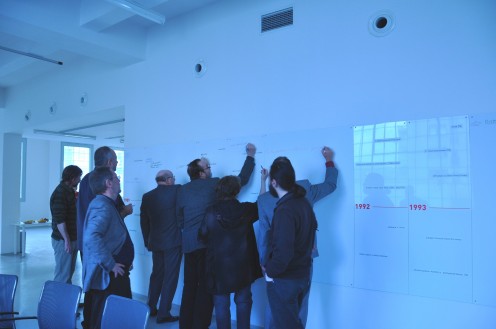 The exhibition Democracy in Action demonstrates that the public is interested in democracy provided that it has the opportunity to participate in the democratic process. The project presents a number of possible ways for citizens to participate in democracy. One of these is a criticism of the current state of society, which is most frequently manifested in various forms of protest. Criticism is an expression of dissatisfaction with a given situation, which also generates a need for a description and analysis of specific issues and problems, for example through the help of statistics and diagrams. It can also be expressed however in the narration of individual and group stories. A diagram of this story is a chronology in the form of a timeline, i.e. a history illustrated by means of a spatial arrangement of key events.
Democracy in Action combines an installation of exhibits with various forms of public participation, including discussions, workshops, questionnaires, it is complemented for example with DOXagora, long-term projct of public discussion which has been started recently. The backbone of the installation is a timeline presented on a wall with a length of 25 metres, the compilation of which began at the first meeting of DOXagora entitled “Our Story”. This timeline shall be progressively added to during the course of the forthcoming discussions and workshops with photographs, articles, statistics, records, artistic projects and responses from the public. The exhibition contains on one hand a summary of the largest corruption scandals which have negatively shaped the local political environment, and on the other an overview of civic protest movements and initiatives. The project is also a call for a presentation of ideas, projects and trends promoting the participation of citizens in positive changes. In both its content and form, the exhibition aims to be an example of “democracy in action”.
The author of the concept of the exhibition and DOXagora project of public discussions is Jaroslav Anděl. The project partners are Czech Position, the Czech Council on Foreign Relations and the Centre of Global Studies, which is also the organiser of an international conference to be held from 9 to 13 May 2012 dedicated to the reflection of present social and political changes.
A number of conference presentations shall take place at DOX.