The exhibition takes place at the Art Archive at DOX within the project Polička/​Shelf.
Exhibition opening: 17 September, 6 pm

Václav Chochola (1923 – 2005) is an exceptional personality of Czech documentary and portrait photography of the latter half of the twentieth century. Chochola’s work exists within the boundaries set out by fine art, documentary work, and genre reportage. He began taking pictures at the age of sixteen, first – as an active athlete – athletic competitions, later his home neighbourhood of Libeň, other towns, nudes, animals, theatre, music, and sport. He was interested in everything, and wanted to use his camera to capture and preserve fleeting things, situations, and events.

At the beginning of the war, he makes friends with photographers Karel Ludwig (1919 – 1977) and Zdeněk Tmej (1920 – 2004). His interest in the city of Prague and its peripheries leads to his association with the artists of Group 42. He meets and photographs other cultural personalities, both Czech and international. He takes portraits of actors and actresses (Lída Baarová, Voskovec and Werich, Josephine Baker), poets and writers (František Halas, Bohumil Hrabal, Jiří Kolář, Milan Kundera, Andrei Voznesensky), painters and sculptors (Zdeněk Burian, Karel Černý, Salvador Dalí, Max Ernst, Kamil Lhoták, František Tichý, Zdeněk Seydl, Jan Zrazavý), he photographs the Prague Uprising, the end of the wear, post-​war theatre premieres, the first years of the Prague Spring Music Festival, the annual walking races from Prague to Poděbrady… In 1961, he and photographer Dagmar Hochová visit Vietnam together, and at the end of the 1960s, Paris, repeatedly. A monumental, personal photographic mosaic of the twentieth century is thus created. From the beginning, he keeps notes, records topics, personalities, places, and dates a negative was created, filing it so that one can find one’s way in this organically growing labyrinth. 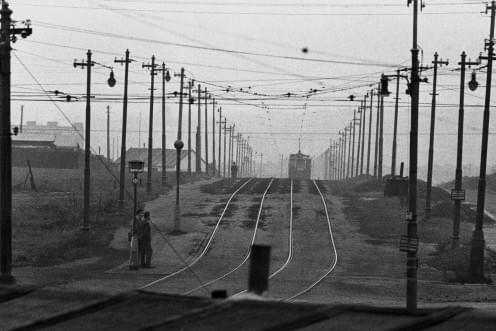 On 22 January 1970, he is arrested for photographing the grave of Jan Palach and spends a month in custody at Ruzyně, and is then given a five-​year suspended sentence.

For Chochola, his archive and its organization was of fundamental importance. He saw it as part of a collective memory, a message or legacy for subsequent generations. He archived not only his own work, but also partly the work of dozens of other photographers, above all the work of Karl Ludwig, Karel Hájek, Zdeněk Tmej, as well as Dagmar Hochová, Jan Lukas, František Drtikol, Eva Fuková, and Josef Sudek. Since the 1970s, first on his own and later with his daughter Blanka (1953) and grandson Marek (1980), he worked on organizing his huge body of work.

This exhibition is jointly organized by the Elpida plus public benefit organization, the B&M Chochola Archive, and the Art Archive civic association as one of the exhibitions of Fotograf Festival 2015. Exhibitions in the DOX Small Tower are always closely related to the activities of the Art Archive, and aside from the work of three photographic generations, catalogues and books in which Václav Chochola participated as a photographer will also be on display.