Go deeper
The film by Jan and Krystyna Kaplan entitled SS 3: The assasination of Reinhard Heydrich  (1992) was introduced at the DOX Centre for Contemporary Art for the occasion of the exhibition The Silent Village , devoted to the obliteration of the village of Lidice during the Second World War. The Lidice massacre was the revenge of the Third Reich for the assassination of the Deputy Protector of Bohemia and Moravia Reinhard Heydrich, which took place on 27 May 1942. 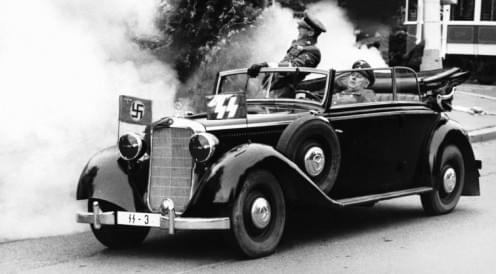 The film belongs to the same genre of documentary dramatisation as Humphrey Jennings’ film The Silent Village (1943). However, the works were created in different times and with different focuses, and thus displayed a different relationship towards the story they portrayed. Whilst The Silent Village translated the plot of the Lidice tragedy into a British environment for the purposes of war propaganda, SS-​3 , with the benefit of historical distance, attempted to present as accurate as possible a film processing of the assassination.
The Czech documentary film maker Jan Kaplan was born in Prague in 1949 and since 1968 has been living in London, where he studied at the London School of Film Technique. Since 1972 he has directed a number of documentary films, amongst the most successful of which include Graham Greene: A Portrait of a Double Agent (1975), The Glittering Crowns (1981), The Glory of the Garden (1982), In Search of Holy England (1989), SS-​3: The Assassination of Reinhard Heydrich (1992), The Shot that Started the Great War (1996) and The King of Diamonds (2010). Jan Kaplan has won numerous prestigious awards, including awards in Tokyo, at The New York Film Festival and The Chicago Festival (a honorary acknowledgement for SS-​3). Since 1983 he has been a member of the British Academy of Film and Television Art (BAFTA). He is the co-​author of the publications Prague in the Shadow of the Swastika (with professor Callum MacDonald, 1995) and Prague: The Turbulent Century (with Krystyna Nosarzewska, 1997). In 1995 Jan Kaplan organised the extensive exhibition Prague in the Shadow of the Swastika, and is the author of the permanent exhibition of the Museum of Communism in Prague. Since the beginning of the 1990s Jan Kaplan has collaborated closely on the majority of his projects with his wife Krystyna, a director and a producer.
Download the press release here.