Go deeper
This exhibition is taking place at the Art Archive as part of the Polička/​Shelf project. 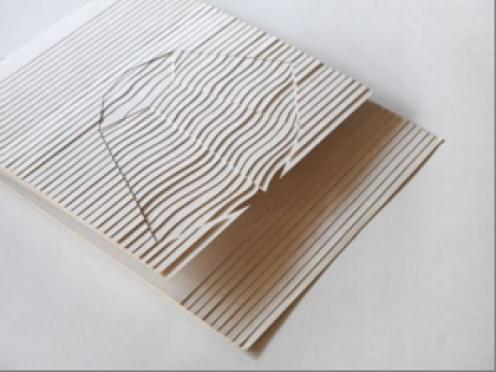 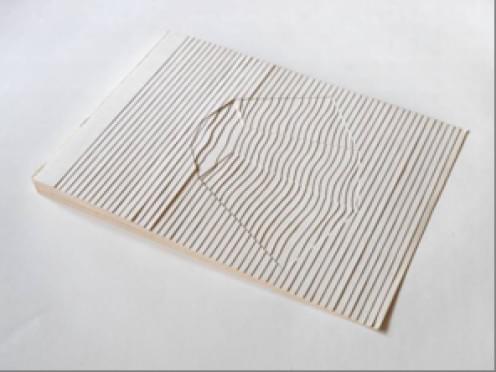 May’s Polička/​Shelf presents two small books from conceptual artist Jan Wojnar (1944 – 2013). But in order for a reader to understand them, it is necessary to go past their white pages. And the path is scantly travelled.

The books themselves are basically minimalist. In the first, The Geometric Figure Book from 1983, Wojnar explores the perception of space. He plays with illusion and attempts to “flatten” (an expression used by the author) a three-​dimensional geometrical shape. This takes place on the edge of the book, which is itself flattened by regular steps in page width to the entire width of the book. Cuts in the paper that move at regular intervals as pages turn, create a truncated pyramid in low relief that falls apart as one turns the pages. The depiction is seen only in relief, and the book, like all of the author’s books of this type, is monochrome, in this case pure white.

In the second of the exhibited books (Procedural Poem from 1971), Jan Wojnar used layered grilles and rasters to touch upon the theme of relationships. This is a theme that he later developed significantly in his work.

The author doesn’t like to explain his works and doesn’t like metaphors. To him, individual works tend to be unimportant; what is important is, in his words, the realization of things. That’s also why he never speaks of works that were lost or destroyed, and as a matter of principle refuses to create duplicates. It is thus necessary to search for these things, the essence, behind individualities – or perhaps in the spaces between them.