To console myself at least a little, /​ I decided that before I take flight, /​ I will sigh from deep down. /​/​ So that something voiced remains of me.

Jana Skalická (1957 – 2015) was an introvert; according to those close to her, she didn’t talk much about her work, and in countless articles about her exhibitions, she mainly describes the specifics of working with her sculptural material – plastic film. Nothing is fully explained, and won’t be. It is therefor all the more necessary to look thoroughly, that is, to realize what can be seen.

Originally, Jana Skalická worked with textiles, thus working with a material connoting a restricted purpose and tradition. On the contrary, plastic film is associated with cheapness, tawdriness, and a lack of good taste. This is also connected to the time her first plastic works came about, the beginning of the 1980s, the Normalization era, where favouring this cheap, scorned material was, among other things, an expression of independence of the approved notion of what is creativity and a work of art, an expression of authenticity.

Of even greater significance is the internal difference: both textile and plastic film are flat materials, but while textile is intrinsically permeable and opaque, plastic film is the precise opposite. This transparency already begins to appear in her early works in a tenuous and further “thinned” textile area, emphasizing contrast in works combining both materials, and in purely plastic works, light is an entirely fundamental, integral factor – its subtle gradation is facilitated by the easy layering and joining of plastic film that can be extended as far as one wants and in an arbitrary direction, which allowed the artist to create three-​dimensional works from a two-​dimensional material. 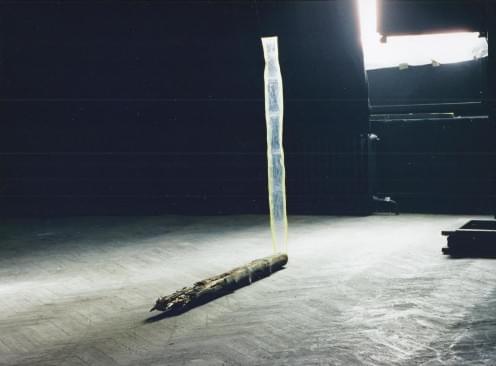 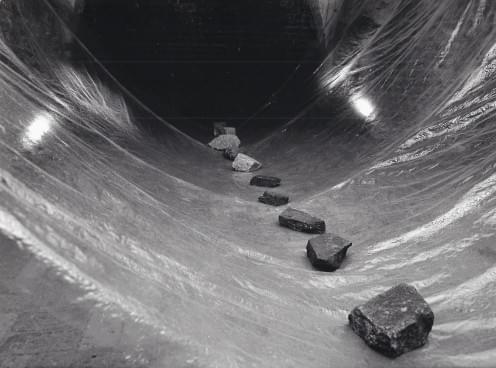 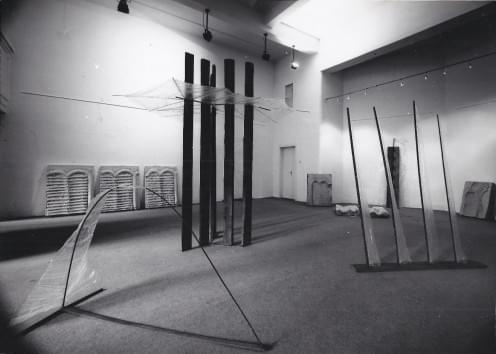 So what do her plastic film objects look like, what can we see? Towards the end of the 1980s, hung sheets gradually changed to structures with a metal framework on which the plastic film is stretched; items stand, lie, are ordered one after another, form arches. Rarely are these things directly reminiscent of something (only the name occasionally evokes a more definite notion) – they are abstract.

Not one sculpture by Jana Skalická remains. Plastic film does not age well; it loses the properties that contributed to its appeal – it grows dull and gathers dust, not to mention the fact that large objects are cumbersome and difficult to store. Skalická was aware of this even during their creation, often destroying them once an exhibition ended. This aspect of her work bears the outlines of interpretive art, which ceases to exist along with its performer. Through her sculptures, Jana Skalická interpreted space, thus the set of givens of the (human) world.

Nevertheless, an exhibition of her collected works is possible, and even suggests itself in a place like Polička/​Shelf. During her entire career and especially towards the end of her life, when she was no longer creating art, Jana Skalická carefully preserved photographs of her works and gradually filed them in three large albums. We thus encounter her sculptures in book form. But here, everything is different – instead of life-​size (or greater) three-​dimensional, objects that reflect and scatter light, we have flat little cards a few centimetres long, one perspective instead of all – the original space that allowed the sculptures to be perceived and understood has been taken away from them. Despite this, they work.