Artist’s books, as we had the opportunity to find out during a year of exhibitions that were part of the Polička [Shelf] project, can take a wide range of forms – from purely conceptual pieces through graphics and painting. From books without texts through appropriation of texts by other authors to one’s own texts. But there are always several aspects of an artist’s book that are applied by its maker during its creation – he/she conceives it as an integrated mental and visual structure, chooses or creates words and images, writes or sets and prints, binds it... This process is shared with creators in another area – the samizdat, which can be termed an artist’s book sui generis.

Magazine Možnost [Possibility], published during the last decade of the normalization era (1980-1989) by Josef Štogr with the support and participation of his wife Jarmila, is a perfect example of this concept. Možnost focused on literature in the widest sense of the word (poetry, essays, reviews, meditations...) and in “texts about”, also took notice of art (a remarkably short time after its creation, it for example featured reflections on the work of Christ, Kaprowov, etc.). But it also featured visual works directly – the Štogrs lived in a studio that belonged to Jarmila’s father, painter František Doležal, constantly in the midst of paintings in various stages of creation, and both were involved in artistic experimentation. Josef, for example, in linocuts, which he chose as the most accessible printing method for the production of posters for exhibitions, and within the scope of his experiments even created a font from linoleum that he used to typeset a samizdat text by Bohuslav Reynek. Using his own method that pushed the limits of printing (using a hammer strokes or just applying pressure with a hard object to print through carbon paper to the underlying paper) he then created illustrations that were oddly compatible with typewritten carbon copies.

Commences on Monday, 6 January, at 6:00 p.m at Art Archive at DOX. The exhibition will be introduced by Lucie Rohanová with the participation of the author. 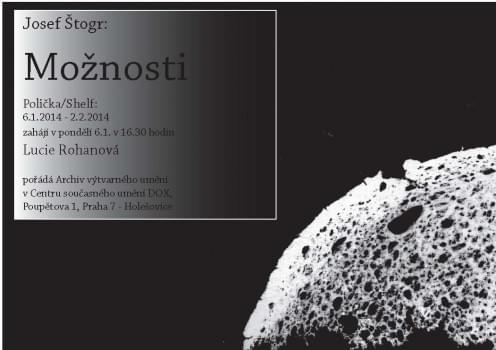 Možnost also often contained Josef’s photo-based graphic art (a negative of a slice of bread evokes a moonscape, a close-up of glass reveals a galaxy on a soda pop bottle) and photography (a geometrical view of the elevator in their apartment building, connected to their eluding the StB – the State Security police). But the presence of seemingly non-artistic reality had the same significance – the nets Josef used to protect himself from insects while working in the field in water resource management.

Such intercessions by everyday reality in Možnost were the most characteristic manifestation of its whole raison d’être. Možnost consisted of its publisher’s cultural discoveries planted into the stream of his reflections, and poetry and comments on art were opportunities for experimentation. Možnost provided space to explore what can be done with material from the world, though one is forced to run about in it almost “as a martyr with a surveyor’s cross in the field” – it featured the entire breadth of the life of independently-minded people, placed in positions of dependency, but never ceasing to strive for independence.