Go deeper
Shelf
At the Archival library at the Center of Contemporary Art DOX, we have dedicated a space (a shelf) to present artists who work with books as a unique means of expression. Visitors will be able to view and leaf through the pages of the exhibited artist's books. A part of the exhibition will present the documents of authors stored on the abART system.
Project curators: Lucie Rohanová, Barbora Špičáková

Exhibition opening: Every first Monday of the month.

First show: Karel Adamus - 10 POEMS PICTURES
The work by Karel Adamus, 10 POEMS PICTURES, inspired by the graphics of Albrecht Durer finds itself at the border of several genres. It represents the author’s work, in the form of a volume with ten poems. In the way it reinterprets the works of others, it relates to the traditions of collage, the ready-​made and appropriation art. In the context of Adamus’ work, we are dealing with an important realisation exploring the possibilities of visual poetry, which is probably the most famous author’s cycle of Poem-​Pictures. The set was formed in 1971 and the publication of the Kassel Edition Boczkowski was managed by Jiři Kolář.
Some of the initial works, by Adamus, that occupy the interface between  semantic and visual poetry, date back to the years of  1967 – 1969. They are still entirely semantic texts, aiming through the spatial arrangement of  language components to emphasize the esthetic aspects of recording language. The building blocks of semantic poetry are words and letters, the same as in experimental poetry. The experiment lies  in their non-​tradional usage. Nevertheless, the feeling experienced by someone viewing visual poetry, can be compared to the feelings experienced after reading semantic poem.
The initial lettristic Visual poems (from 1969), are followed by The Lyrical Miniatures (1969 - 1970), in which different types of typewriters appear for the first time. First of all as hardly noticeable signs (punctuation signs) and after that as letters. Above all it is the use of typescript, so well liked by many writers of visual poetry, which Adamus transforms into a distinctive tool of nonverbal and yet still written – expression.
In the poems created with the use of a typewriter – a magical tool, which provides all signs with the same space, so that the paper placed within it, rests under some invisible, yet precise and calculable grid – where the importance is given not to the word, but to the sign. The sign freed from mediating concepts, becomes an esthetic unit. Something that is initially a purely functional script of the typewriter is made anew into an esthetic form. Fixed signs are displayed on the surface of the paper, independent of the semantics, the grammar, the typescript; placing emphasis more on the non – verbal, esthetic components of the work. 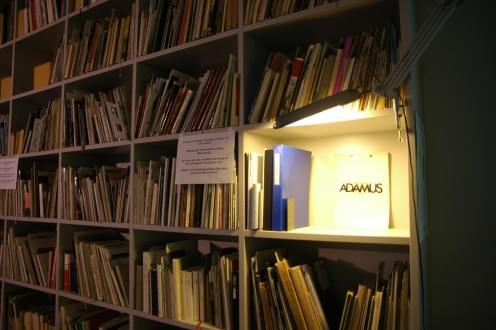 In contrast to classical authors such as Josef Hiršal and Bohumila Grögerová, Adamus is not concerned here primarily with making the word independent, liberating it from the burden of political misuse, rather he aims at the mediation of the experience of poetry in another way. He neither moves towards a more speculative manner of work as expressed by The Theory of texts, by Max Bense ; but emphatically develops a visual esthetic and the lyrical qualities of typescript. He brings the initial, general idea into a final, definitive form , usually in one flash of inspiration, “in one go”. He holds the view that a plan which is too precise can be harmful to the outcome.
When Adamus first began involving the typewriter in the creative process, he worked with Durer’s graphics, the dialogue of classical artworks and the optical and rhythmical characteristics of the machine; the new unity – powerful impulse towards independent treatment of the entire surface of the paper, in order to create its own structure.
Lucie Rohanová