Go deeper
The creative collective of OKOLO presents the “Light Sculptures, Czech Lights 1950-​1990” exhibition which comprises a curatorial selection of several table lamps made in 1950-​1990in former Czechoslovakia, or in the territory of the present-​day Czech Republic. The exhibition is not a retrospective that would present this theme scientifically, or academically, but an unrestricted selection that depicts the development of the style of this typology on the example of several prominent designers or unique individual designs. 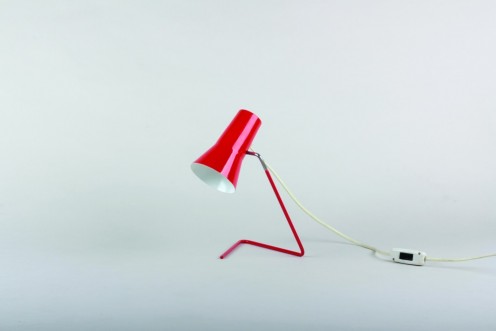 The installation starts chronologically in the 1950s, when the Czechoslovak industrial and interior design had an advantage because it was not forced to conform strictly to the period’s socialist realism and historicism in such areas as fine arts. In the field of lighting design, Czech designers tended towards the style of international modernism, which dominated throughout the architecture and design of almost entire civilized world. Lighting design,
in this context, is often reminiscent of principles typical of modern visual arts, primarily of abstractionism and the upcoming kinetic art, which was suppressed by socialist realism in the former Czechoslovakia. 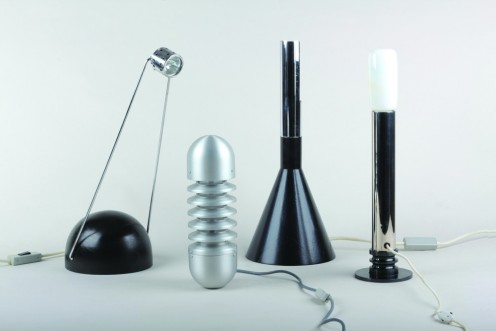 Thus, lamps – like the period’s glass production – became one of few possible materializations of modernist ideas, which had been fully repressed for some time in the field of fine arts. Lights are delicate statues with a luminous function. This holds true for both the production in the newly established producer cooperatives, such as Napako, Drupol, Lidokov, and Zukov, and the hand-​crafted lights by Alena Nováková, Antonín Hepnar, and others. Their aesthetics and designing methods approximated modernist designs of European and American designers in many aspects. Although the forms are similar, the quality of workmanship often lags behind the brilliant works of French and Italian designers such as Angelo Lelli, Gino Sarfatti, Boris Lacroix, Michel Buffet, and Jacques Biny. Refined metals and detailed workmanship were substituted with imitations and substandard quality of socialist production. The unique table lamp designed by Jaroslav Anýž, a descendant of the famous pre-​war lighting brand, also displayed at this exhibition, serves as an exception to these average works. This lamp, designed for the national enterprise of Lustry in Kamenický Šenov, is a technically and aesthetically artful combination of three materials: the base is made from Ditmar Urbach porcelain, the body from metal, and the shade from glass. Other lamps designed by Josef Hůrka, Pavel Grus, and others are very elegant and feature great visual aspects despite some workmanship flaws. Czech design, for that matter, struggled with the confrontation of great design and imperfect workmanship throughout the communist regime.
The organic decorative aesthetics of the so-​called Brussels style, named in Czechoslovakia in relation to the world exhibition in Brussels in 1958, dominated until the late 1960s, with table lamps of various elegant delicate shapes made in the above-​mentioned producer cooperatives serving as the best example. 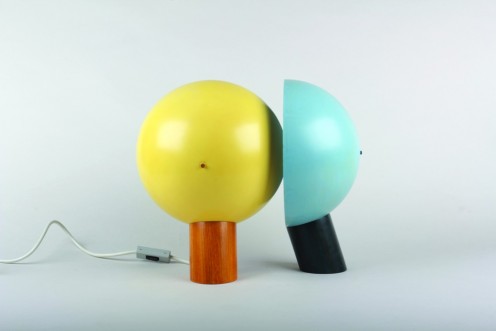 It was in the 1970s when new impulses arrived – the simplification and monumentalization of new forms. The works of designers/​artists/​artisans Růžena Žertová and Antonín Hepnar stood out most in that period and continued to do so into the 1980s. The unique lights, which they made themselves in very limited editions, correspond with the period’s interest in space-​age design and minimalism. One could easily find links with the decorative design of European designers Michel Boyer, Maria Pergay, Kim Moltzer, and Boris Tabakoff, whose works were also related to small-​lot production and limited means. The impact of the futurist Italian designs by Joe Colombo and others, or their period presence, is also evident. Antonín Hepnar’s work – later, he started to experiment with halogen and very minimalist shapes – focuses on wooden lathed shapes, whereas the work of Brno-​based architect Růžena Žertová specialized in metal
Thus, the exhibition presents several fundamental works of Czech design from the second half of the twentieth century and partially documents its stylistic development on the single typological example. Most objects on display are presented in such a curatorial selection for the first time. Through their joint context, we strive to rediscover a neglected chapter in the history of Czech design and typology of table lamps.