Since the 1917 revolution, every time period and generation in the USSR has had its own corresponding form of resistance to Bolshevism and totalitarianism: the White Guard movement, peasant uprisings, religious and nationalist movements, General Vlasov’s Russian Liberation Army, samizdat, “stylagovs”, non-conformists, dissidents, hippies and punks, the independent media, political performance art, and civic activism.

But are all of these forms of resistance (sometimes unintentional and not always politicall) equivalent? After all, for example the non-conformist artists of the 1960s and 70s never considered themselves dissidents, and assiduously avoided politics, just like contemporary artistic efforts do not always meet with the understanding of the political opposition... Nevertheless, do not those who found the courage to go against state surveillance and chose their means of defending the values of freedom and independence have something in common after all? 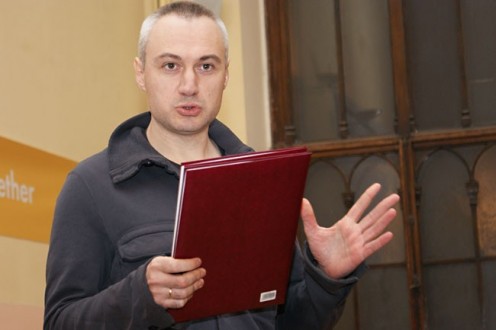 Gleb Morev (* 1968) graduated in 1992 from the Faculty of Philology at the University of Tartu in Estonia. He is an expert in the history of twentieth-century Russian literature. He has worked as a journalist for Seance (Сеанс; 1998), the editor-in-chief of the magazines New Russian Book (Новая Русская Книга; 1999-2000) and Critical Mass (Критическая Масса; 2002-2007), and of the OpenSpace.ru internet portal (2008 – 2012). He is a member of the Great Book Prize literary academy and the collegium of nominators for the Josif Brodsky Memorial Scholarship Fund. Since 2016 he has been the editor-in-chief of the Open University (Открытый университет) website. He is the author of the book Dissidents (Диссиденты).

Líza Morózova (* 1973) is an artist, performer, associate professor in psychology, and art therapist. In 2005 she successfully defended her dissertation entitled Socio-Psychological Research Into Provocativeness (based on contemporary avant-garde art). She has had over 160 exhibitions throughout the world. In 2005 she represented Russia as part of the ESCAPE group at the Vienna Biennale. She is a laureate of the Kandinsky Prize (2012, 2014) and the Moscow Biennale Prize (2015). She lives and works in Moscow.

Culture of Resistance: Dissidents, Non-​conformists, Contemporary Artists includes free admission to the 1917-​2017 exhibition on the day of the programme.

Capacity is limited. Reservations can be made at rezervace@dox.cz

The programme will take place in Russian and will be interpreted into Czech.