SIMON MCKEOWN – Big Data & The Digital Family of the Future

Have you ever wanted to talk to a family member who is no longer alive?

British artist Simon Mckeown presents how in the future we will be able to use Big Data streams to create artificial digital life.

Simon Mckeown’s ‘Preserved Memories’, which is part of the Brave New World exhibition, shows how we will be able to reconstitute our reality without having to ever say goodbye to our loved ones. The successful British artist will present this concept in person during a presentation and subsequent discussion at the DOX Centre.

Big Data allows exponential development and achievement of unexpected and perhaps even unwanted results. In the future, it will be possible to recreate a deceased family member from photographs and video using a combination of gaming technology, voice synthesis, and Big Data streams from social networks, government databases, and health, consumer, or for example construction records. We will have achieved a discovery reminiscent of Frankenstein’s creation: a synthetic digital existence with recognizable form. 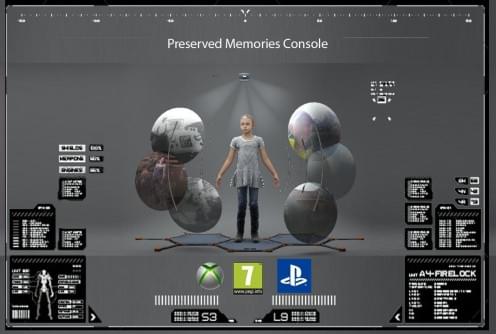 Today you passed an exam, got your driver’s licence, flew off for a vacation, bought new shoes, broke up with your partner – the system will know about it all. This will be because you told it so on social networks, as well as through constant surveillance (with or without your permission) resulting in the daily creation of thousands of records that are then archived and used further.

Places will be recreated using technology from gaming engines and mapped using GPS technology and other historical data, for example weather records. Here’s an example: on 23 August 2020, it snowed in Rome and your dead uncle was there. The stream of historical information from his social networks tells us that he was there on vacation celebrating his wedding anniversary. His precise location will be known thanks to additional data from photographs and many other sources.

The question is: would you like to speak with him?

Simon Mckeown is an award winning internationally exhibiting artist renowned for his work which touches on and considers disability as well as our digital futures. He has over 20years experience having worked commercially completing animation and special effects for film and television as well as working with computer games giant Atari. Mckeown is also Reader (semi professor) at one of the UK's leading universities for digital innovation and practice, Teesside University, where he works with the School of Computing in both it's games and post production and special effects sections.His work has been presented worldwide, in Europe, Australia, and North and South America.

Programme will be held in English with translation to Czech.

The Brave New World project has been supported by grant from Iceland, Liechtenstein and Norway.