The Beginning of the End

“Nor am I of those who despise dreamers. For the world would be at the level of zero were it not for its dreamers gone and of today. He who dreamed of democracy, far back in a world of absolutism, was indeed heroic, and we of today awaken to the wonder of his dream.”

In August 2014, at Polička/​Shelf we had the opportunity to think about what material aspects of a life realized primarily in the immaterial sphere could persist, about the paths of things in time and space. Now we are also being given a similar opportunity to go back – but somewhat further and in a more general manner, though once again through an individual approach.

In a similarly obscure manner as that album of paper puzzles, we now have another album – an album of trip photos. It is also part of the estate of the family of literary scientist Jiří Pistorius and art historian Miloš Pistorius; we don’t know who put assembled them, but it was certainly someone at least a generation older, the album’s patent date and the dates on some of the images indicates the beginning of the twentieth century. 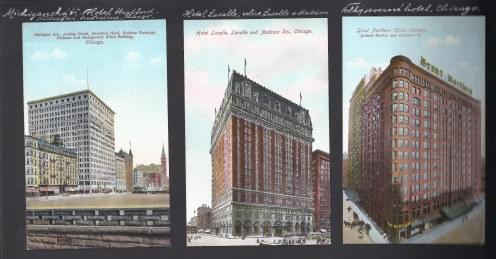 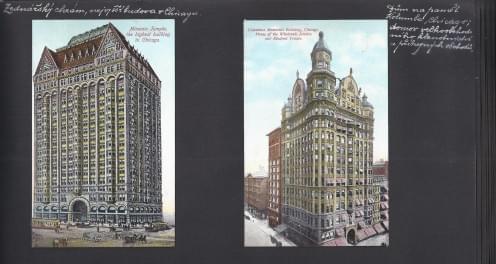 The album in its modern form is reminiscent of a record of a Grand Tour – but the author did not visit the royal and noble courts of Italy or France, but rather places where someone of that era saw as being instructive and inspirational, the New World. He apparently did not have a camera, and thus carefully collected postcards of places he visited – he saw Washington, Niagara Falls, Yellowstone Park… but apparently he was most taken by Chicago.

At the turn of the century, this US city presented itself primarily through photographs if its public and commercial buildings – train stations, hospitals, schools, and above all multi-​purpose structures – skyscrapers.

Reinforced concrete made it possible to create one of the largest structures ever built by human hands – the height of Chicago’s late nineteenth century skyscrapers approached that of the towers of European cathedrals – and later Chicago-​inspired buildings from around the world are several times higher. Physical size is an aspect that simply cannot be overlooked or ignored – what does it mean if the largest thing we are capable of building is an office building?

Today, hundred-​year-​old coloured postcards of buildings, looking with majestic optimism towards the twentieth century and hitherto overshadowed by nothing, inform us with what is today an unattainable clarity of the beginnings of this way of building and of life.