The exhibtion takes place at the Fine Art Archive at DOX.

Exhibition opening: 21 May at 6 pm

Blansko. More Art Than You Would Expect.

Between 1982 and 1991, the small lobby of the Cultural Centre of the Town of Blansko hosted 72 solo or collective exhibitions not only by local artists, but also those of national import. This happy peculiarity, which stimulated local artistic and cultural life, was partly due to the unnatural political situation, which made it impossible for a number of these individuals to exhibit in larger cities, but mainly due to local enthusiasts, who even amid the difficulties of the late totalitarian period had the desire to do something, to not stagnate in exploring the world, to meet interesting people, and facilitate such meetings for others.

The gallery provided a refuge from unfavourable circumstances to theoreticians such as Igor Zhoř and Jiří Valoch, who brought in many artists that today we look upon as leading personalities of the Czech art scene of the second half of the twentieth century (Bohumír Matal, Eduard Ovčáček, Petr Kvíčala, Vladimír Kokolia…), and put on a number of group shows for artists linked by some artistic opinion, process, or subject matter (Jan Činčera, J.H. Kocman and Miloš Šejn, working with paper, “fiery men” Svatopluk Klimeš, Jan Steklík and Václav Zykmund, the thread work of Josef Hampl, Dalibor Chatrný, Čestmír Kafka and Stanislav Zippe). 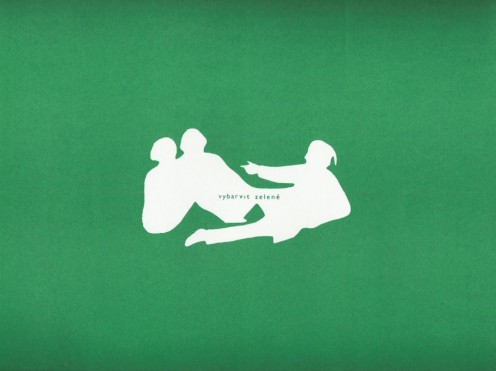 The exhibition in the Little Tower of DOX traces the gallery’s history through an abundant collection of photos from exhibitions and openings (photographed by Josef Liška), and especially through Antonín Juračka’s collection of catalogue posters. This collection has survived in its entirety, and is an example of fine graphic design and an overview of an impressive number of cultural events that took place at the close of one difficult period in history: the Normalization period, during which Blansko became a machinery manufacturing centre, and which was also related to the influx of new residents and the town’s radical reconstruction. The exhibition attempts to illustrate the relationship between these cultural events and the broader context of social change.