The Sweetness of Death: View into the Archive III - obituary

Is there a "sweetness" to death? What can we say about a state of transition from life to non-​existence? Are we waiting for paradise, rebirth, salvation or destruction?
How are we to cope with death?
Since the time, that humans became aware of their own mortality, we have always considered this question.
Death has traditionally been seen as a gauge between the principle of life (soul) and the body.
"In a general philosophical perspective, our existence and death is part of the same process and primarily it shouldn't be divided. Only discovery and definition of time in the Upper Paleolithic (era of the hunter-​gatherer ) defined our concept of death, including our fear of it." 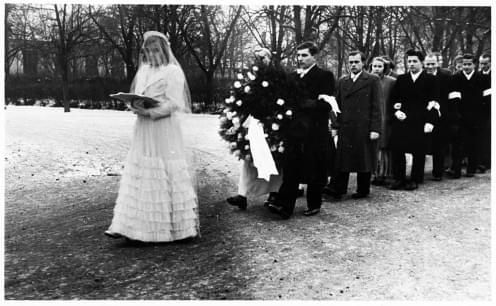 Being aware of mortality various human cultures have been coping with death through the help of religion, rituals and behaviors that reflected specific ideas about death and the after life.
Practically every culture has made a significant point of death and their religious ideas and funeral rituals were the major manifestations of social solidarity.
Why is our technologically advanced society abandoning these rituals?
Is it an attempt to push death out of our consciousness? For a modern culture based on the concept of continuous development and progress, death became an unpleasant complication. Is that why death and everything what is connected to it, such as aging and diseases is pushed not just to the edge of consciousness, but also to the edge of society's interest? Is this linked to the materialism in our life, cultural migration or scientific progress?
It seems like there is no space for the old and sick in an eternally young society.
We broke free from death, but only in our minds. We broke old bonds, but death stayed with us.

The exhibition  from the cycle View into the Archive   titled The Sweetness of Death   reminds us of the end of our life, it's memento mori.
Obituaries of Czech artists are contained within many types of documents collected by the Archive of fine arts and the are presented to the public in
a form of exhibitions.
This exhibition is also a memorial to these departed. 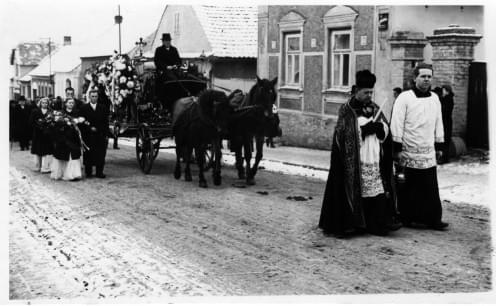 Our concept wasn't only to display obituaries, but also to recall the rituals that accompany the departure from life.
The exhibition includes photographs of Radoslav Kratina, who in the mid 80's captured the fleeting beauty of graves in Olšanské cemeteries in Prague.
Photographs displayed by Miroslav Urban are also focused on the typology of funeral sculptures. Since the 70's he has taken images of hundreds of cemeteries in the Czech republic and worldwide.
Urban's macabre collection of cemetery aesthetics is followed by three short movies which he made. The film's themes are linked to death, past, devastation and destruction.
Photographs displayed from the family album of Lucie Kalátová demonstrate how the funeral rituals were observed 65years ago in a small Czech town.
The documentary Last places of man filmed in a Prague Strašnice crematorium made by Jan Kuntoš and Lucie Kalátová takes a closer look behind the scenes of this crematorium to explore some of the current rituals in contemporary society in dealing with death and exposing false taboos in this rarely seen environment.

Also on display are selected photographs taken from a photography project named The Cremator by Jan Lesák . Images were shot in Pardubice crematorium and they were inspired by the cult Czech movie The Cremator directed by Juraj Herz in 1968, also filmed in the crematories mentioned above.

The Archive of fine arts collects, elaborates and accesses information and documents about contemporary - particularly Czech and Slovakian - art. On the website www.artarchiv.cz the archive runs its own information system called abART. The database can distinguish more than 150 kinds of documents including books, catalogues, invitations, magazines, clippings, photographs, diapositives, envelopes, letters, visiting-​cards, calendars or lists of exhibited works.